Voice of a Moderate - Just Submitted This Comment to the New York TImes in Reference to the War on Women. YES!!! Sharyn is a Vagina Voter 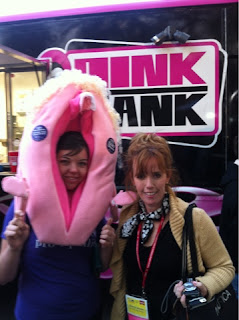 I support Mitt Romney and do believe that he will NOT cut funding to Planned Parenthood- at least in his first term.  The fact is the GOP needs to look in the mirror and start a dialogue about family planning concerns, birth control, and STD exams.

It makes "no sense" for the government to stop funding most of what planned parenthood does.  The funding of abortions is something that I believe should not be paid for by the taxpayer.  If someone were to pay the "entire" cost of the abortion then it might deter them from doing it multiple times.

As a Catholic I do NOT believe that abortion should be paid for by the taxpayers BUT I do believe it needs to be legal.  We do not want a lot of young women dying from "in home" attempts.

The Republican Congressman Scott DesJarlais of Tennessee is a "legitimate idiot" & a perfect example of the hypocrisy in the GOP.   Although I want a fiscally conservative Senate I can say that my moderate heart wants BOTH Akin and Mourdock to lose.  Believing they would spend precious time dealing with issues of the uterus when they should be focused on the economy.  Mitt Romney has already said he'll spend his time working on making America Economically healthy.  Since the current guy leading the country has focused on "pet projects" and has ignored the middle class that is hurting from his energy policies I hope that the War on Women won't be a factor in this race.  Still the odds I give President Obama for winning are 60-40.